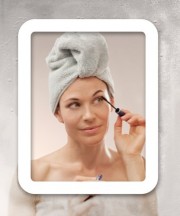 Smart Crowdfunding is slated to carry out strategic marketing initiatives for the 'Clear Vision' crowdfunding project on Indiegogo. This campaign endeavors to raise the funds needed to bring "the world's first truly fog-free mirror" to market.

New York City, N.Y., September 23, 2014 (Newswire.com) - Alexander Aksenov, the founder of ‘Clear Vision’, launched an Indiegogo crowdfunding campaign on September 11th in order to raise the funds needed for his new invention. This campaign has a funding goal of $10,000, which needs to be raised by October 11th in order to begin manufacturing of ‘Clear Vision’, which Aksenov describes as “the world’s first truly fog-free mirror”. Clear Vision will solve the problem of trying to use the mirror after a steamy shower. Wiping a normal mirror with a towel usually doesn’t work since it fogs back over right away, and people have to waste valuable time waiting for the mirror to clear. Clear Vision solves that problem through the innovative use of plasma technology.

The Clear Vision mirror has an ergonomic design that will fit any interior, and uses ultra-strong suction cups in order to keep it strongly adhered to any surface. It measures 7 inches from corner to corner and can be used literally anywhere, even in a hot and steamy shower. It is guaranteed to never fog over, even when the surrounding mirror or glass is a sheet of white from the steam. The Clear Vision mirror does not require batteries in order to function and comes in a convenient impact resistant casing which is available in five colors: orange, blue, green, black and white.  Due to its small size, and the use of suction cups to keep it in place, it is also very transportable and can be taken during travel.

"Clear Vision is the world's first fog-free mirror that operates without batteries. Based on plasma technology."

While the Clear Vision team has been hard at work with all of the essential groundwork, they have not produced a complete prototype yet. However, the photos and computer graphics on the campaign page show what the final Clear Vision mirror will look like. The team has finalized the choice of materials and design for the mirror, which means they are ready to begin the next phase of production.  Their next step will be creating a prototype, and initiating product testing. The team’s goal is to produce a video of a working prototype as soon as possible.

Clear Vision is based in Russia with an office in New York. It was founded by Alexander Aksenov who engaged a group of scientists and designers in order to implement his idea.