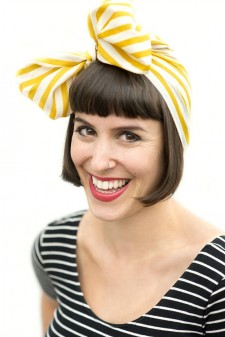 The gifted children's performer Peanut is introducing her newest adventure via the 'For the Kids! Help Fund Peanut's TV Show and New Album!' project on Kickstarter. The team behind this campaign is crowdfunding to make a dream come true, and bring happiness and laughter to children everywhere.

Los Angeles, California , July 26, 2016 (Newswire.com) - Michal Karmi, better known as “Peanut” to all of her fans, has launched a crowdfunding campaign on Kickstarter to raise the funds needed to bring her unique brand of happiness to households everywhere. This campaign has a funding goal of $35,000, which needs to be raised in order to produce Peanut’s new album “Ampersandwich” and make the Peanut TV show a reality. Ampersandwich, is a magical story of friendship, exploration and adventure. It focuses on the experiences of two friends who stumble upon a secret world: the land of Ampersandwich. In conjunction with this new album, Peanut and company also hope to bring the world an extra special one of a kind TV experience. Peanut states, “We want to build a world where imagination, humor, positivity, and interaction will not only entertain, but also develop and inspire.”

There are several children’s programs out there, focusing on many diverse and inspiring subjects. Because of this, campaign viewers may be asking themselves, “Why Peanut? What makes her special enough to support?” The team around her states it best, “Babies stare and point at her in the street. Toddlers light up when they hear her voice. There’s something unique in Peanut’s approach, that transcends screens and creates meaningful connection.” Audience members frequently tell her, “You have to have your own TV show, Peanut! You’re a modern day Pee Wee Herman.” Inspired by the genius and artistic vision of Paul Reubens, she decided to take their advice and pursue the idea of creating a television show. Television will enable her to reach out to more households and bring her quirky imagination and unique gift for happiness to children everywhere. In her show, Peanut will be able to cultivate a relationship with kids at home through a magical world of adventure and imagination, helping make their world a happier place.

The Peanut team has been working very diligently on all of the essential groundwork for the new album and TV show, and they are now ready to begin the process of sharing the joy. Peanut has teamed up with some vetted Los Angeles talent to make this a reality, but they need help from the public, which is why they have launched their Kickstarter campaign and hired a team of crowdfunding specialists to help them spread the word. All funds raised with this campaign will go toward making the dream a reality, starting with filming sample clips that can be sent to various TV networks and unique content providers. As an added bonus with this campaign, the team is offering several rewards. These rewards, which serve as funding incentives, range in value from a chance to pre-order the new album, to the donation of a CD to families in need on the supporter’s behalf, various merchandise items, and high incentive rewards that coincide with the different pledge levels. Full details can be found on their Kickstarter campaign page.

Michal “Peanut “Karmi is a critically acclaimed children’s musician and YouTube personality who is based in Los Angeles, California. She has a very sweet, cheerful voice and a bubbly disposition that makes her the perfect fit for a career in children’s entertainment. She is quirky, animated and charismatic with a natural gift that captivates young listeners, giving her the perfect opportunity to create a subversively educational and magical experience. Peanut has an extensive background in childcare and lives to entertain through song and dance.

To contact via email write to Peanut at: peanut@michalkarmi.com